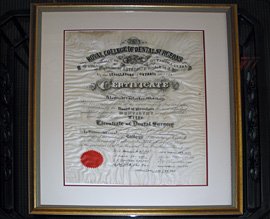 Our Toronto practice has a long and unique history. It originated in the 1920’s when Dr. Alexander MacKay opened his first office in the Beaches. He later relocated the practice to Yonge and College during the 1950’s when the subway lines were being built along Yonge St. By the 1970’s, his son, Dr. Hugh MacKay, following in his father’s footsteps, graduated from his father’s alma mater, the University of Toronto’s Faculty of Dentistry. He then expanded the practice, inviting his fellow alumni, Dr. Adrianne Schmitt and Dr. Frances Greenwood to join him renaming the practice the Dental Group.

Initially it was located on 123 Edward Street where many of our patients joined us at this time. In 1988, the practice moved to its current location at 39 Pleasant Boulevard. The glue between this group of dentists was their combined love of teaching – all were clinical professors at the Faculty of Dentistry. Dr. Leung continues this tradition teaching prosthodontics to both graduate and undergraduate students at the University of Toronto.

Eventually, when Dr. Adrianne Schmitt retired from full time teaching at the University of Toronto in 2000 she took over as the sole practitioner for the practice until her retirement. And when Dr. Schmitt decided to retire from private practice in 2008, she gave Dr. Beatrice Leung the opportunity to take over. It was a perfect fit as Dr. Leung has both a specialty in prosthodontics and an interest in geriatric dentistry – both of which were interests of the original “Dental Group.” She now continues the legacy of this long-standing practice and we invite you to join our family and help write another chapter in this wonderful history!